I have been working on one big project for quite a while now and took breaks here and there to do some fun smaller items for friends.

My good friend and squire brother Thelvald was in for a surprise this last Pennsic.  Nobody realized he never got his Award of Arms even though he has been playing for many years.  Many of us decided that that needed to happen at Pennsic.  We all sent in recommendations and I volunteered to make a circlet for him along with a local Baroness/laurel who offered to make a scroll for him.  Here is the circlet that I created.  It was a quick project but very rewarding.  I simply took a strip of medium leather (probably 6 or 7 oz.) and used a backgrounder to make the stars.  Then dyed it black and coated it several times with Carnauba Cream.

The next project was a gift for a new friend who just started in the SCA a few months ago.  She has been doing an awesome job so I decided to make her a little something.  It also allowed me to practice with paint on leather and the gold leaf process I have been working on.  Here is a picture of this beauty.  I am very happy with how it turned out.  The design has special significance to her.  Yes, that is really 24k gold leaf.  I will be having several posts about my explorations into gilding leather.  It is a practice in and of itself with little documentation that I can find online.

The last project I will document here is a set of circlets I made to donate to the largess coffers of their Majesties of the Middle Kingdom.  There was a challenge set forth to be met at the fall crown tourney a few weeks ago.  The challenge was to make a dozen pieces of largess to donate and the one that got the most votes from the populace would get a prize.  Here is my entry.  I didn’t win but I did get quite a few votes so that pleased me.  Overall, it wasn’t about winning, it was simply about supporting the dream. 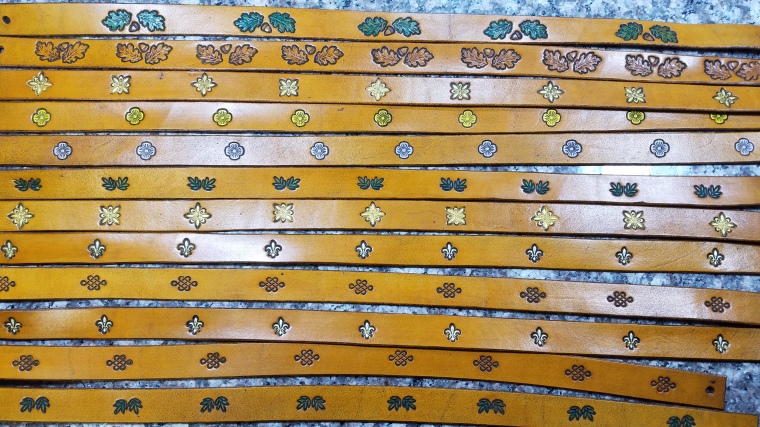 Sigrun Ormsdottir of the Middle (aka Lena Erickson)

Modern Heathenry from a Feminist Point of View

Bird with a Brush

Art in many forms

The musings and updates of the aforementioned author, fresh from the ether.

A 16th century foray into assassination, espionage, and unconventional warfare.

Custom made leather products and armor

Current projects and interesting bits found along the way.

Recreating the arts and sciences of the Middle Ages

The Reverend's Big Blog of Leather

Society for Creative Anachronism Every Day of Your Life!

Custom made leather products and armor

Little Druid on the Prairie